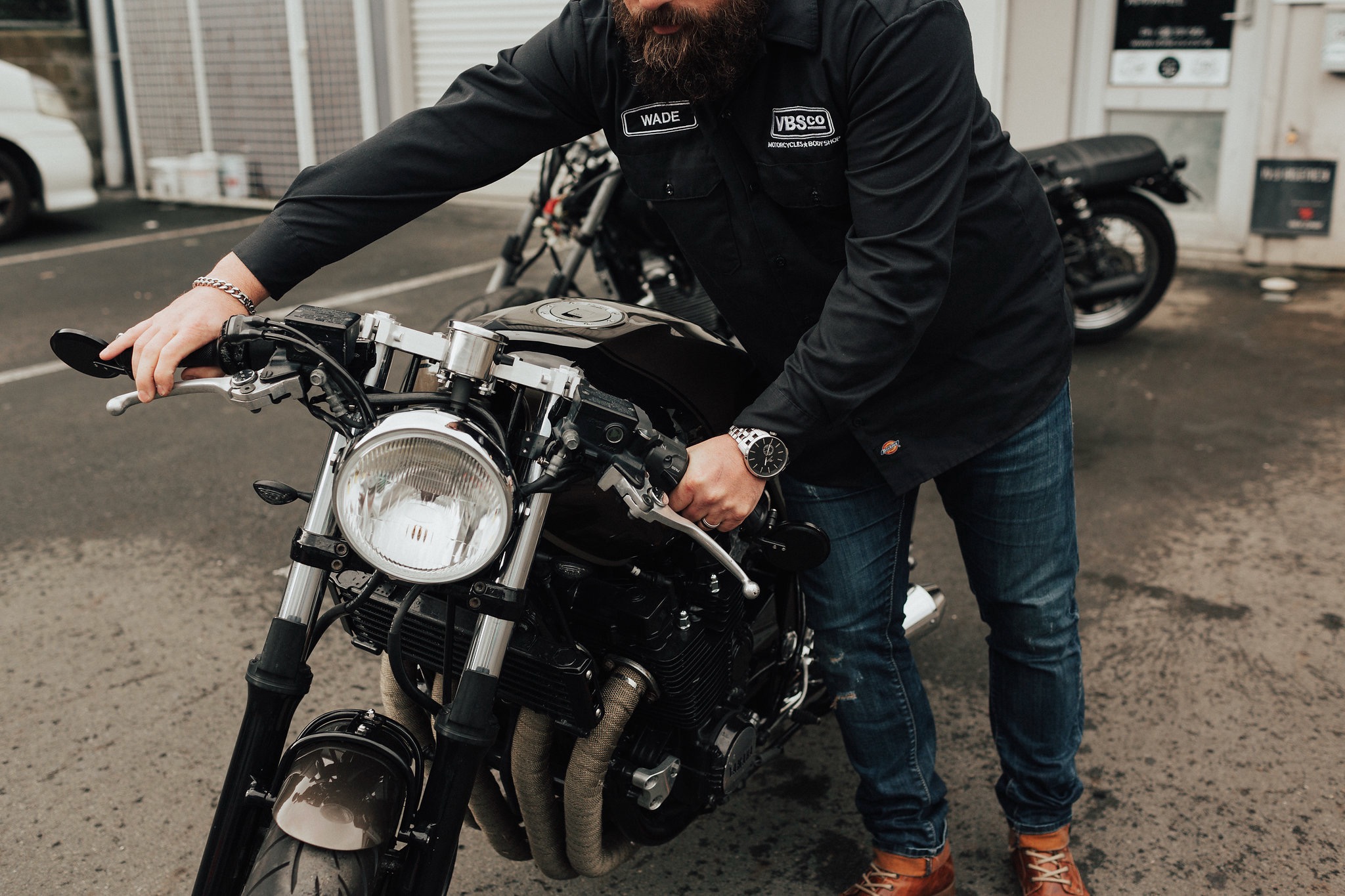 34-year-old Hamiltonian Wade Phillips stepped straight out of school into a panelbeating apprenticeship at the tender age of 16 and has been working on cars and bikes ever since. For the last half decade, Wade has been professionally building hot rods under the Van’s Body Shop banner and he’s now started to shift focus to two wheels...

Wade has been into motorcycles for as long as he can remember. His first ride was a 1981 Suzuki JR50 dirt bike, which his dad bought for him in 1984. Talk about a lucky two-year-old! Unbelievably, Wade has kept the bike his entire life and has recently restored it to original glory so his two sons Boston (three) and Lincoln (16 months at time of writing) can also enjoy it. As cool as the JR50 is, it’s Wade’s custom cafe racer that really demands attention.

The bike started out life as a 1998 Yamaha XJR1200; a large displacement, powerful sports tourer. It had a windshield, pack rack and was, “quite ugly,” according to Wade.

The first thing he did when he got the bike back to his workshop was to strip it back to the bare frame. It was important to Wade to hand-fabricate as many parts as possible in-shop to, “show potential customers what could be done for relatively low cost,” and the attention to detail is extremely impressive.

The rear end of the frame was re-fabricated with a custom seat hoop for a smoother, cleaner look and the entire frame was then powder-coated. The bike was completely deloomed and the battery hidden from view in a custom box. The wheels, fork sliders and bottom triple clamp were also powder-coated black.

The brutish stock engine was left untouched, other than a fresh coat of paint. Chrome slip-on mufflers were bolted up to the heat-wrapped factory-issue headers and chrome cone filters were fitted to the four original Mikuni carbs for a bit of bling.

The stock gas tank was also retained. It was stripped back to metal and coated in-house in a Nissan Qashqai colour named Truffle, complete with custom decals.

The seat pan was hand-fabricated by Wade. He also shaped and fitted the foam before handing the whole unit over to Midnight Upholstery in Hamilton for wrapping in vinyl. Original riser handlebars made way for a set of drop-down clip-ons, for that racing look and feel - who cares about sore wrists and back when the bike looks this good, right?

Wade’s intention was to build something special to show what could be done with the everyday bike, before selling it for a profit. In the end, the result was so special that it started bringing in more and more work. “It’s going gangbusters,” Wade says. So it was decided it would be more financially viable to keep the machine for advertising purposes.

Wade also admits he’s become attached to his custom cafe racer and loves riding it. “It handles really slick,” he says, “The original bike was designed for touring and carrying a pillion and lots of gear, so it has a really torquey engine in what is now a much lighter motorcycle. Combine that with the racing ride position and performance is massively increased.” Wade says the 1200 is still available at “the right price” but stresses that he built it to his tastes and specifications, which is what he’d rather do for future customers; ensuring they get their own, unique dream bike.

Your cart is empty.